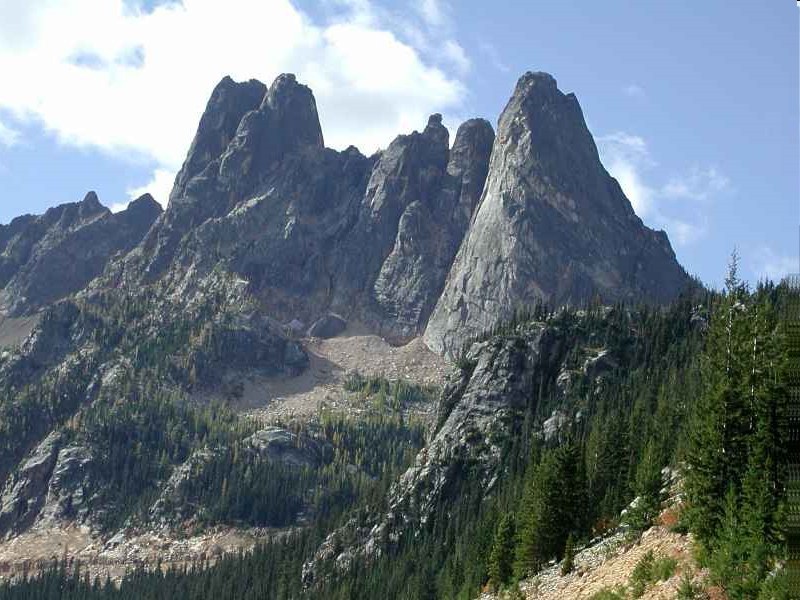 GEOLOGY
Golden Horn Batholith - Tertiary period, Eocene epoch - (49 millions of years before present). The Golden Horn Batholith is a highly evolved alkaline (sodium-rich) granite that hosts a suite of rare minerals. About 50 million years ago, the magma that formed the batholith cooled and the rock-forming minerals began to crystallize. Through the process of fractional crystallization, the residual liquid became increasingly enriched in incompatible elements (such as lithium, zirconium, and the REE (rare earth elements)) as the rock-forming mineral phases that were crystallizing rejected them. Late stage volatile rich fluids carrying this highly fractionated chemistry precipitated a suite of rare minerals in miarolitic cavities within the alkaline granite.

The Golden Horn Batholith is the type locality for three of these rare mineral species, zektzerite- NaLiZrSi6O15, the REE mineral, okanoganite- (Na,Ca)3(Y,Ce)12Si6B2O27F14 and calciohilairite- CaZr[SiO 3]3·3H2O. Over 50 mineral species have been identified at this locality, with a great potential for new mineral discoveries.

Collecting is within the Okanogan National Forest. The host granite covers a vast area of of alpine terrain.